So when we last spoke, I was leaving Bisbee with a most delicious slice of cake in tow, and headed toward Tombstone, Arizona.  Despite the warnings from many folks that Tombstone was nothing but a tourist trap, I was undeterred.  It’s a very well-known paranormal hotspot and darn it, I wanted to see it!  I also had a sneaking suspicion that old timey photo shops would abound (I was not wrong).  Fun fact: I love getting old timey photos taken.  You’ll see evidence of this when I post about Gettysburg…

Tombstone is definitely a town that if you blink you’ll miss it, but luckily my trusty Waze friend, Thomas, guided me expertly into town.  I only had about an hour to spend there since I had a long drive to Blythe, California ahead of me but considering the town is the size of a postage stamp, I figured I could see everything in 60 minutes or less.

Before I get into my visit, I want to give you a quick rundown of a few of the well-known haunted locations reported in town.  Unfortunately with it being such a short visit, I didn’t get a chance to investigate any of these locations, but got to see them which was really enough for me.

Probably best known for the shootout at the O.K. Corral, Tombstone is said to be haunted by the cowboys who were killed in the 30-second fight.  It is said that the actual site of the O.K. Corral was not where its sign is today, but I’m guessing it must be pretty nearby.

Boothill Cemetery is another paranormal hotspot on the outskirts of Tombstone, where many men killed at the O.K. Corral, prospectors, prostitutes, and other outlaws are buried.  Interestingly, the Boothill Cemetery got its name from the fact that many of the people buried there “died with their boots on.”  Although I did stop at the cemetery and there are few things I love more than headstone pictures, I simply cannot find any photos in my camera or phone. 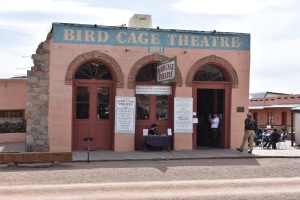 This was the main attraction for me.  The Birdcage Theatre, so named for the cages hanging from the ceiling where um, ladies of the night, would hang out.  As you can imagine, the Birdcage, with its gambling, drinking, and sex was a very popular haunt for locals and visitors during its heyday.  The 26 documented deaths, however, were probably not quite as enjoyable.  With so many deaths and patrons such as Wyatt Earp and Doc Holliday, it’s no wonder the Birdcage is said to have up to 31 ghosts.

Paranormal activity here includes countless apparitions in period clothing, old time music, women singing, cards shuffling, glasses clinking, laughter and music blaring from the building during the 1920s when it was abandoned, objects going missing and returning out of nowhere years later, and heavy furniture moving on its own.

I haven’t mentioned it yet, but now seems as good a time as any.  For my entire life, as long as I can remember, I’ve been very sensitive to ghosts and energies.  We’ll get into the details in another post at another time, but suffice it to say, my hackles went up when I was near this building.  There was definitely an energy in and around the building that was undeniable to me.  I would have loved to do a formal investigation, but alas, I had a long drive to California ahead of me.

The bottom line with Tombstone is this – yes, the town has absolutely capitalized on its notoriety and it is without a doubt a tourist destination.  However, my visit, although crowded with tourists and screaming children, was fun, informative, and gave me an appreciation for this Old West town.  I had a great time checking out the shops, buying kitschy souvenirs (like my “There’s a chance this is whiskey” coffee mug), and walking along the wooden sidewalks.  I have nothing but respect for a town putting such effort into preserving and showcasing its history.  Are you going to get an ‘authentic’ Old West experience there?  Not really.  Will you find unique and quality souvenirs?  Meh.  But how often do you see an Old West town with a mix of modern conveniences and original structures filled with true spirits of the 1800s?  In my opinion, ignore the naysayers, prepare for tons of children running amok and weirdo bloggers stopping in the middle of the road to take pictures, and appreciate the colorful history of the town.