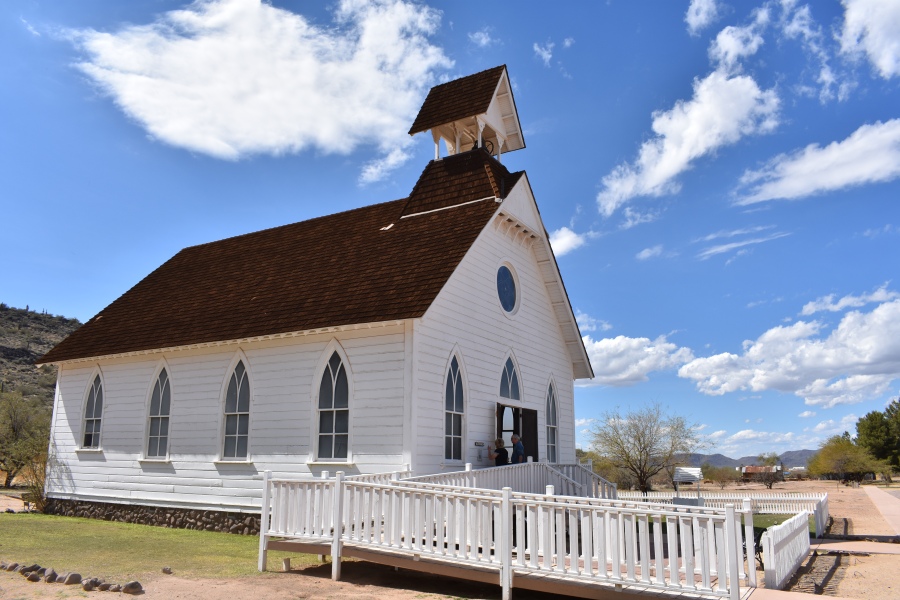 Okay folks, this is part one of a multi-part saga where I travel all throughout Arizona looking for ghosts and old things, make an embarrassing appearance at Joshua Tree National Park, brunch in Laguna Beach, eat far too much Del Taco (just kidding, there’s no such thing as too much Del Taco!), scare an Uber driver with conspiracy theories, and spot more windmills than my little windmill-loving heart can handle.

This tale begins in Phoenix, Arizona where I met my parents, who were out there dog-sitting for family. From Phoenix, I was heading on to Orange County, California, so the most logical route to take was through Bisbee and Tombstone. In case you’re not familiar with Arizona’s geography, that is NOT a logical route to take, but what can I say? I wanted to see ghosts and old stuff.

While in Phoenix, my mom and I had a delish Mexican meal at Carolina’s, based on an excellent recommendation from one of my best friends, who was a longtime Phoenix resident.  Dare I say it was superior to Del Taco?  I’m not sure if that’s a joke or if I’m serious or if I should even be comparing such amazing authentic Mexican food to Del Taco.  Either way, it was excellent and I highly recommend it.

Stuffed full of tacos, we headed out to the Pioneer Living History Museum.  I’d done some research on haunted locations in Phoenix and this particular location stuck out to me because the map of the park on their website shows “Goats.”  I love goats, I’ve always loved goats, and dang it, I wanted to see goats at a haunted pioneer village!  Sadly, the goats were not out and about that day, but the rest of the park more than made up for the lack of goats.  It is made up of 26 buildings, all of which were relocated to the park from their original locations. with some structures as old as the mid-1800s .  The ghost stories around the museum include people hearing children’s voices singing in the old schoolhouse and seeing a dark figure moving in and out of the opera house.  The complex certainly had a unique energy to it and I would have loved to explore at night.  This is a very family-friendly location and the buildings themselves are fascinating (and old.  Did I mention they were old??) and each have a description of their history and purpose.  Admission is $10 for adults but be sure you check their website before heading out, as they have varying hours.

The next day, we left Phoenix and I was adamant about going to Tombstone.  Thanks to every person I know, I understand that Tombstone is a tourist trap.   Lucky for me, ghosts hang out in their old um, haunts, regardless of whether they’ve become commercialized.  I decided to ignore the masses and press on to Tombstone, by way of Bisbee.  We arrived in Bisbee late on a Thursday night and this was unfortunate, seeing as this adorable little town is somewhat perched in some mountains and the roads appear to be original from the late 1800s. I’m not even kidding – driving around to find a parking space through narrow brick ‘streets’ that wound around with hairpin turns on the side of a mountain in the dark was not exactly anyone’s idea of a good time. But we did finally find parking and made our way (carefully) to our hotel, the Copper Queen. If you haven’t noticed, I’m a sucker for history and just anything old. The Copper Queen did not disappoint. Completed in 1902, this gorgeous old gal was an eclectic mix of Old West and mid-1990s decor.  Fun fact – this is the longest continuously operating hotel in Arizona and has never closed its doors.  Literally.  The front doors don’t even have locks.

Our room was on the second floor, accessible by a beautiful old staircase or a somewhat frighteningly authentic early 1900s elevator. Since I was going to be on the road for almost three weeks, I channeled my inner pack mule and was lugging around a giant suitcase, a carry-on bag, a laptop bag, a camera bag, and a purse, so I opted for the elevator. Our room was known as the J.A. Jance room, named for the mystery author and former Bisbee resident.  I don’t know if I’d thought I booked a double queen room or was so used to booking for just myself that I accidentally booked a single queen room, but the situation remained that my two parents and I were in a single queen bed room. The lovely front desk staff was happy to bring up a rollaway cot for me, but as you can see from the photo, our quarters were a little tight. And as my mom observed with a little too much glee, I was a 37-year old woman sleeping on a tiny cot at the foot of her parents’ bed.

My mom and I decided to grab a drink at the bar that was on the first floor of the hotel. We met two gentlemen who were on a roadtrip themselves and they shamelessly hit on my mother for a good half hour before we finally decided to leave. Even though it was close to 10:30 at night, we decided to take a walk around Bisbee. Since we hadn’t seen it in daylight yet, we didn’t know what to expect. What we found was a delightful little town with steep hills and old buildings, lit up with festive lights strung from building to building and the sounds of tourists and locals alike enjoying the warm spring evening. Seeing how cute the town was at night, I was anxious to explore during the day when more shops and restaurants were open.

The next morning, we set out early to explore Bisbee before my parents split off to drive to Las Cruces, New Mexico, and before I started backtracking through Tombstone and then on toward Orange County, California.  We checked out some antiques shops in town, burned our tongues off at Bisbee Hot n’ Spicy, checked out the remnants of the Queen Mine, and visited the nearby town of Lowell.  Lowell is basically comprised of one street that looks as if its former residents had left in a hurry in the 1950s.  It reminds me of a scene you’d see in Fallout (probably why I liked it so much!).  The street is quite eerie yet still nostalgic, and seems to be a ghost town, aside from an automotive shop that looked like it might be in operation but I couldn’t quite tell.  Either way, it’s clear that someone is lovingly taking care of this tiny main street and maintaining its historical integrity.

After Lowell, we headed back toward Bisbee where we grabbed a snack at the High Desert Market, an eclectic market and cafe that looks like what I’d imagine a quintessential Bisbee shop to look like.  The staff was friendly and there was a piece of cake I bought from the bakery that might be the best cake I have ever had in my entire life.  For a person who takes pictures of EVERYTHING, I somehow managed to skip the picture and therefore don’t remember what kind of cake it was.  I was far too busy eating it to let the idea of taking a photo even cross my mind.  All I can remember about it was cream cheese.  And that I ate it when I pulled over at a rest stop later in the day and was tempted to turn around and go back to Bisbee for more.  But alas, it was not meant to be for I had already headed down the dusty trail to Tombstone.